California native Matthew Modine rose to prominence in Full Metal Jacket. A noted activist, he heads a pro-bike organization called "Bicycle for a Day" and uses a bicycle for much of his transportation. Modine starred as Hall of Famer Honus Wagner in The Winning Season, a role which found him on a Celebrity Jersey Card. 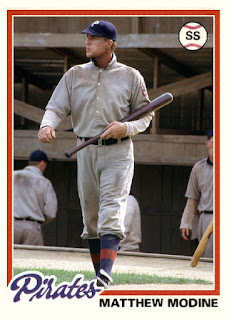 Born in Cincinnati, OH and transplanted to the Chicago area as a teenager, Hal Sparks has carved a career in entertainment as a actor, comedian, voice actor, musician, host and more. At 17, he won the title of "Chicago's Funniest Teenager" from the Chicago Sun-Times. While at Los Angeles International Airport in 2010, Sparks and another passenger used CPR on an unconscious, elderly man who had collapsed in the airport terminal. The backstory on Hal Sparks appearing on a Celebrity Jersey Card is one of the best. In 2012, the Pirates began using the iconic "Zoltan" hand gesture from Dude, Where's My Car? as a good luck symbol to end a 19-season losing streak. After a Twitter campaign to encourage the "real Zoltan" to appear at a game, Sparks flew to Pittsburgh on July 25, 2012, to throw out the first pitch. The Pirates won that day, beating his hometown Cubs, but the Pirates finished the season 79-83 to extend their streak to 20 seasons. 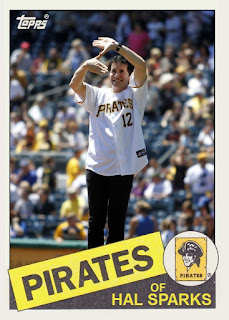