Canadian actress Sarah Chalke rose to fame as the second actress playing "Becky" on television's Roseanne. She was replaced by Lecy Goranson (the original Becky), but later replaced her again. She later co-starred on tv's Scrubs. Chalke earned her Celebrity Jersey Card by playing in the Big Slick Celebrity Softball Game in Kansas City. Unfortunately, she was tagged out by Kevin Rahm in the photo. I don't know why she was airborne, but it made for a cool card. 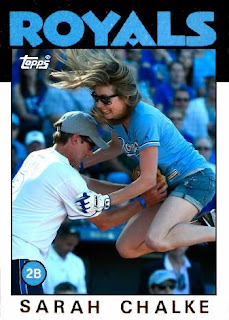 Los Angeles native Laura Marano started acting when she was five and later starred as Ally Dawson on the Disney Channel series Austin & Ally. The young actress has also added movies and singing to her resume. Like fellow actress Sarah Chalke, Marano played in the Big Slick Celebrity Softball Game and earned a Celebrity Jersey Card. 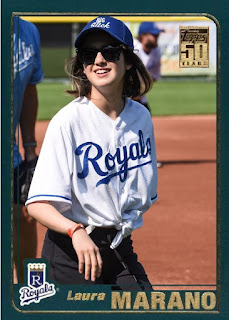