Detroit native Rich Pyle rose to fame on television's Hardcore Pawn. He left the reality show in 2013, but has remained active on tv, radio, at conventions and on the music scene. Pyle is an accomplished drummer. The Detroit Tigers invited hometown boy Pyle to throw out a ceremonial pitch. Were they trying to "drum" up interest (sorry)? Was he just a "pawn" for them (even sorrier)? Either way, Pyle earned his Celebrity Jersey Card that day. 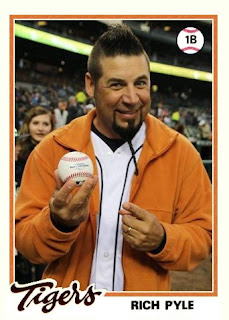 Rick Dale was the star of American Restoration, a another reality television show featuring Rick's Restorations, Dale's Las Vegas business. Ironically, Dale had previously appeared as an expert on Pawn Stars. Dale has been restoring things since his childhood and Rick's Restorations is still thriving. Dale earned his Celebrity Jersey Card when he threw out a ceremonial pitch for the Tigers, losing his sleeves in the porcess (in a nod to former player Ted Kluszewski?). 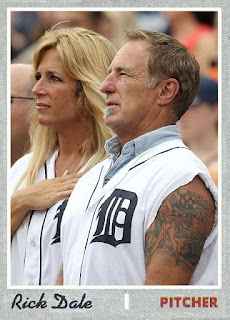