Friend Encounters is a weekly seeries featuring friends who have met celebrities.

It's been a while since we visited the Evil Zebra, everyone's (nobody's) favorite retired referee on the east coast. EZ would say he is the celebrity, but for the purpose of today, I say he takes second place to Dolly Parton.
The pair met on the set of The Mike Douglas Show. I still do not know how EZ got on the show. One day, I will pin him down and get the full story. Until then, I just get to enjoy his "Blast from the Past" posts on social media.
I keep telling EZ he should write a book or at least put his stories online somewhere. The guy has dozens (hundreds) of stories. His connection to the late actress Dana Plato is enough to merit publishing.
I'll continue prodding EZ for more stories and details, but I must be careful. He can be a bit surly. He is against pineapple on pizza and Chicago pizza in general. I try to explain that all Chicago pizza is not deep dish. We have some awesome thin crust and I actually prefer the thin crust better. He does embrace his place in The Jay Leno Club, although he often uses it for comedic fodder.
It's always fun seeing EZ encounters. I will continue featuring EZ and hoping to get more stories. 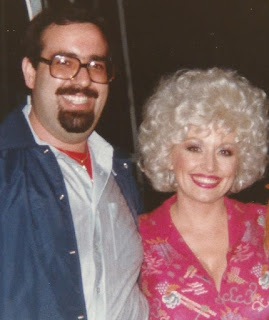 Evil Zebra and Dolly Parton in California-1980.
Posted by Johngy at 6:00 AM