Celebrity Jersey Cards is a weekly series in which I create virtual trading cards for celebrities wearing jerseys. Today, I present a special Halloween edition.

April Jeanette Mendez was born in New Jersey and dreamed of becoming a pro wrestler. She was misdiagnosed with depression, before being properly treated for a bipolar disorder. AJ rose to the top of the WWE, married CM Punk, wrote a book about her experiences and retired from the ring. She remains active in raising awareness for mental issues and is quite an inspiration. During her career, her character went through several phases. One such phase saw her cosplay as Kane. Her bit as the Big (little?) Red Machine earned her this Special Edition Celebrity Jersey Card. 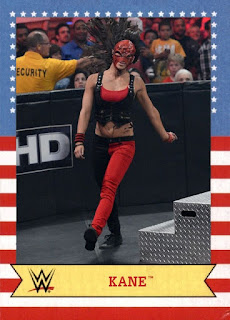 A native of Kentucky, Leva Bates has a degree in theater and radio and television production with a minor in dance from Murray State University. She worked as an entertainer at at Universal Studios in Florida, but she gained real fame in the wrestling ring. "Blue Pants" has incorporated cosplaying into her wrestling persona. She currently wrestles for All Elite Wrestling, but she earned her Celebrity Jersey Card by becoming Mankind. 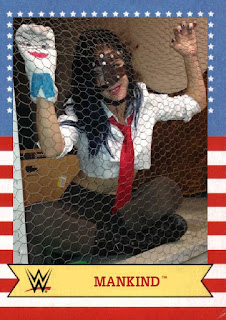