This is a regular series in which I create virtual trading cards for celebrities wearing jerseys. Once again, we are working our way alphabetically through all of the Major League Baseball teams. Today features WNBA-MLB crossovers.

After a stellar career at LSU, Seimone Augustus was selected by the Minnesota Lynx first overall in the 2006 WNBA Draft. After 14 seasons with the Lynx, Augustus signed with the Los Angeles sparks for the 2020-21 season. She wore #33 for the Lynx, but donned a #1 Twins jersey when she took part in a Lynx Night the Twins held. August gets extra points for taking some swings, which earned her a Celebrity Jersey Card. The #1 was probably best known for Eric Soderholm in the early part of his career. 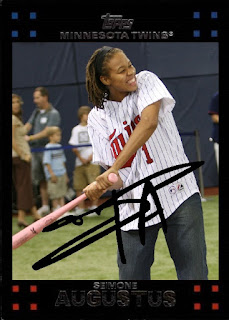 After a great career at Georgetown, Rebekkah Brunson was selected by the Sacramento Monarchs in the 1st round of the 2004 WNBA Draft as the tenth overall pick. After six seasons with the Monarchs, the Lynx selected Brunson in the dispersal draft when the Monarchs folded. Brunson retired earlier this season, but not before becoming the first player to win 5 WNBA titles. She also holds the WNBA record for rebounds. She currently is an assistant coach with the Lynx. Brunsonw as also part of the Twins' Lynx Night, wearing #32 for the occasion and earning her Celebrity Jersey Card. Brunson wore #32 in her WNBA career, but LaTroy Hawkins wore it most famously for the Twins. 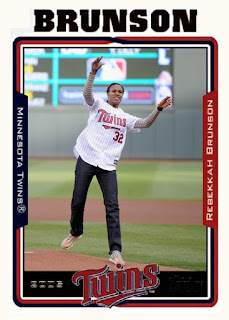