This is a regular series in which I create virtual trading cards for celebrities wearing jerseys. Today we feature two sports journalists with very different careers.
A native of San Jose, CA, Fallon Smith worked at Comcast SportsNet Bay Area and as a reporter for the Oakland Raiders. Emmy-nominated, Smith has developed a large social media following as she continues to grow her career. I'm not sure if Smith 's Celebrity Jersey Card comes from her time with the Raiders, but it is definitely on the sidelines. Her #4 is probably for former quarterback Derek Carr, because I don't think Smith wore it for former kicker Fred Steinfort. 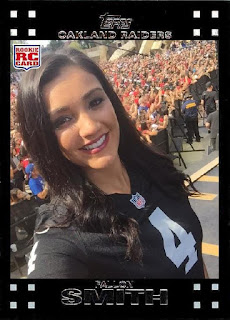 Born is Miami, FL, Jenn Sterger is a  model, television personality, and former online columnist for Sports Illustrated. While at Florida State University, Sterger was one of the FSU Cowgirls, a group of women known for wearing skimpy outfits and cowboy hats to football games. When the ABD camera focused on her, legendary broadcaster Brent Musberger commented  "1,500 red-blooded Americans just decided to apply to Florida State." Thus a career was born. Sterger later was involved in a controversy involving Brett Favre sending her improper texts when they both were with the New York Jets. On a side note, another of the FSU Cowgirls was Catherine Perry, who gained fame as Lana in the WWE. Sterger wore a #06 Jets jersey to merit her Celebrity Jersey Card. I always wondered if  "06" is the same as "6" offically in team history. 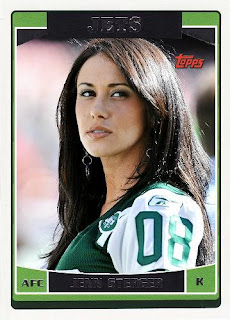