Michael Kingston is the creative force behind Headlocked, a professional wrestling comic book that debited in 2007. My first of a few interviews with Michael can be found at On the Beat With Michael Kingston.
The story focuses on Mike Hartman, a college theater major who discovers the world of pro wrestling one night and is changed forever. He sets his goal to make it to the top of the WFW, the largest wrestling organization in the world.
Wrestling Hall of Famer Jerry "the King" Lawler provides the cover art. Many other wrestlers have contributed to the series as well.
Michael is a talented and fun guy. His booth at comic cons is always one of the busiest and most entertaining. Michael always has a wrestler or two appearing at his booth. Other wrestling guests at the con stop by to chat with Michael, Michael's guests and the fans. Such was the case when Michael met CM Punk in 2011.
A huge comic book aficionado, Punk checked out the Headlocked booth delighting Michael, who said, "When CM Punk was the biggest wrestler in the world, he came to my booth at SDCC. 1 of only 2 stops he made that day (the other being Jill Thompson’s Booth)."
The best in the wrestling world met the best wrestling comic creator. It was a meeting of twp icons.
Go to Headlocked Comic for more info. Also, follow Headlocked Comic on Facebook for more frequent updates. 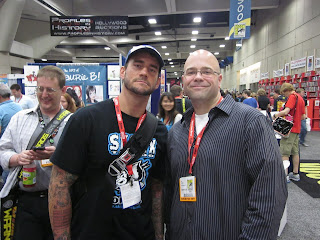