Through my coverage of ReedPop's New York Comic Con, I was given the opportunity to see and review a special screening of The True Adventures of Wolfboy. I'm always looking to try new things here and I had the time while home bound during the pandemic

The True Adventures of Wolfboy is often called a coming-of-age story, but that is underselling it in a big way. While it is true, the movie is so much more than that.

The film opens with 13-year-old Paul (Jaeden Martell) repeating “I’m normal, I’m a regular kid, I’m just like everyone else,” as he stares into a mirror. Sadly, Paul is not like everyone else. He looks like a werewolf due to excessive hair growth all over his body. He's not even like his father, who doesn't share that condition. We quickly learn Paul's mother is long gone, but we do not know if she also suffered from the condition.

Paul wears a mask to hide his facial hair, but his father (Chris Messina as Denny) makes him remove the mask at a carnival with disastrous results. Paul is harassed by bullies, but his real angst is due to his father not understanding his situation.

Upon returning home, Paul finds a mysterious gift from his mother with a map and a note telling him there is an answer when he is ready. That was all Paul needed to see as he immediately ran away on a quest to find his mother and some answers.

Paul's journey is divided into scenes introduced with clever titles. The first chapter finds him at a circus where he meets the first of many fascinating characters he will encounter. Ultimately, the cast of characters will include the circus ringmaster (John Turturro as Mr. Silk), a teenage singer (Sophie Giannamore as Aristiana/Kevin) and an eyepatch-wearing rebel (Eve Hewson as Rose). Each character faces a similar battle of fitting in.

Paul eventually finds his mother (Chloë Sevigny as Jen), along with some answers, but by this point Paul has already found much more important answers in life.

The story is told so well, capturing Paul's anger, sadness and desperate desire to belong. In that way, Paul is like every other teenager. He is normal. He is regular, but that's what Paul needs to discover on his own. Interacting with the others who have the same struggles despite being “”normal” leads Paul to more answers than his mother could ever provide.

When watching The True Adventures of Wolfboy, I immediately thought of Edward Scissorhands. The movies share the same sort of sadness portrayed in a fairy tale type way, without sugar coating anything, but also without hammering the viewer with despair.

I read some interesting reviews. One viewer was happy the film gave no easy answers. Another called it “an empowering glimpse into self-esteem and social acceptance.” Another simply said it was entertaining. I agree completely with these comments.

The film might have evoked different feelings from me, because I associated with Paul right from the start. 40 years ago, as I was about to enter high school, I was Paul. No, I didn't have congenital hypertrichosis like Paul, but I had my own obvious physical abnormalities which caused the same sort of feelings. I didn't need answers like Paul, but I needed to belong, a lifelong battle of mine.

Seeing Paul and his newfound friends deal with their issues in a real way was tremendously powerful. There isn't a fairy tale ending, but it is a good ending. It's a peaceful ending, which really is what Paul needed all along. I'm so glad it didn't end happily ever after. Paul deserved better than that and so did the viewers.

The end did not set the table for a sequel, but the possibility is certainly there. I am happy about both of those statements.

I totally enjoyed The True Adventures of Wolfboy, even if it was a bit rough for me to watch at times. The quest for self-acceptance is a universal battle, even to those who don't show it. In the end, I was completely drawn in and entertained by the characters and the story. I might have even learned a bit about myself in the process. I couldn't ask for much more from a movie. 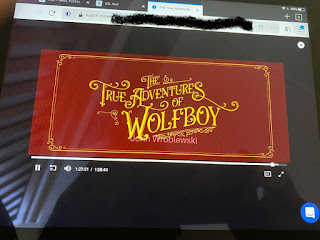