When last I delved into absurdities, I questioned whether it would become a series. I quickly realized there are enough absurdities out there to make it a recurring series.

I could go into a rant on the missing comma. I have little tolerance for bad grammar and punctuation on permanent or massed produced consumer goods. Do they not know better before they make something?

Instead though, I will focus on the more absurd aspect. In the lower right corner, it reads "Names can be changed."

The fact that this needed to be included is a scary statement on our society. I would hope the names can be changed. What are the odds of Jack and Jane having a dog named Sophia? That market would be incredibly small.

I should probably applaud the fine folks at What's Up Dog for anticipating the absurd questions and being proactive. Still, even with that note, I am willing to bet people responded with questions about names. 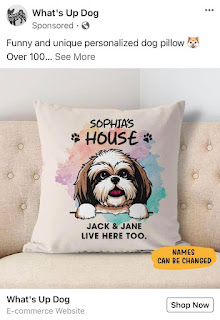