Cards That Never Were is a recurring series in which I create virtual trading cards for players missed in various sets. It is a concept I have borrowed from far too many to list, but I appreciate all of their efforts. More of my creations and many great creations of others can be found in the Custom Baseball Cards Facebook group (and not just baseball cards).
Running back John Brockington starred at Ohio State, before being selected by the Green Bay Packers in the 1st round of the 1971 NFL draft. Brockington played a little over six seasons with the Pack, before joining the Kansas City Chiefs for the final 10 games of the 1977 season.
All told, he played 95 games, rushing for 5,185 yards with 30 TDs. He also had 1,297 receiving yards and 4 TDs.
For his efforts, Topps gave Brockington cards in sets from 1972 through 1977. That left a 1978 "career capper" missing. I was able to find a nice pic which I think fit that set well. 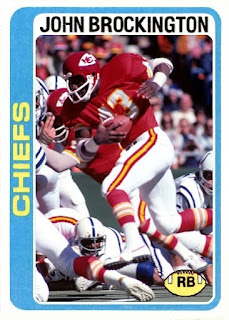 Did not know that he finished up with the Chiefs

I didn't remember it either. Weird that him and Brockington both did.