Cards That Never Were is a recurring series in which I create virtual trading cards for players missed in various sets. It is a concept I have borrowed from far too many to list, but I appreciate all of their efforts. More of my creations and many great creations of others can be found in the Custom Baseball Cards Facebook group (and not just baseball cards).
Mike Hohensee set many school records as a quarterback for the University of Minnesota and is in the school's Hall of Fame. He went on to play for the Washington Federals of the United States Football League from 1983–1984 and the Ottawa Rough Riders and Toronto Argonauts of the Canadian Football League in 1985.
In 1987, he played in two games for the Chicago Bears, while the regular NFL players were on strike. He was 28-52 with four touchdowns and one interception, while racking up 343 yards. That would be it for his NFL career.
In 1987, he played for the Pittsburgh Gladiators in the Arena Football League and threw the first TD in AFL history. He played one more season with the Gladiators before retiring as a player and starting his coaching career.
Hohensee had a few stops on his resume, most notably for me was his stint with the Chicago Rush. In 2006, he guided the Rush to the AFL championship.
I had the pleasure of interviewing Coach Hohensee, which can be found at On the Beat With Mike Hohensee. After the Rush folded, the Iowa Barnstormers held a tryout in the Chicago area and I contacted the team about interviewing Coach Hohensee. It was a thrill of mine, since I had been a fan of his for a long time. I'm happy to say he was super nice.
We've been Facebook friends for a while and when he recently posted a rare photo of himself playing with the Bears, I had to put it on a 1987 card. More specifically, I had to ask Lynn from that FB group to put it on a card, which he so graciously did.
Thank you to Coach Hohensee for great memories and the interview. Thanks to Lynn for the great card. 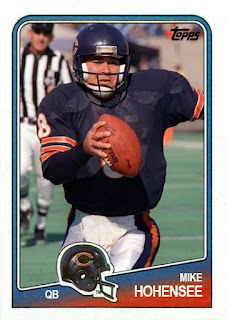