This is a regular series in which I create virtual trading cards for celebrities wearing jerseys. Because it's cold in Chicago, I'm featuring some California celebs.
Actress, comedian and writer Ellie Kemper was born in Kansas City, MO. Kemper is probably best known for her role on The Office, a show which I never watched, making me one of the few it seems. When Kemper sang the National Anthem at a Los Angeles Rams game, she wore the #16 jersey to earn her Celebrity Jersey Card. Danny Amendola wore it most recently, while Ron Jaworski wore it years ago. Also, Warren Beatty wore it in Heaven Can Wait.
Correction: As pointed out in the comments, this is most likely a Jared Goff jersey. How did I miss that? 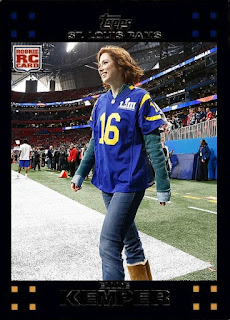 Faithful reader and contributor Brian suggested a Celebrity Jersey Card for actress Lindsay Ridgeway. Perhaps best known for her role on Boy Meets World, Ridgeway also originated the role of Tina Denmark in the Los Angeles cast of Ruthless! The Musical. An accomplished singer, Ridgeway has performed the National Anthem several times for the the Kings and Angels. Ridgeway's Celebrity Jersey Card comes from her appearance at a San Francisco 49ers game, however. The #1 doesn't have a rich history with the 49ers, but is currently worn by Shawn Poindexter. 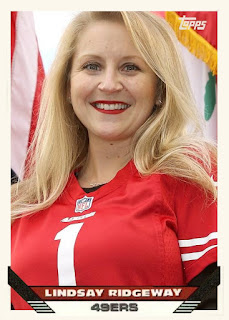 Chris-Nice catch. How did I miss that? Duly noted in the correction on the post. Thanks!!