This is a regular series in which I create virtual trading cards for celebrities wearing jerseys.
Born in Mississippi, Spencer Haywood was a star at Detroit Mercy before being selected by the Buffalo Braves in the second round (30th overall) of the 1971 NBA draft. Haywood went on to have a Hall of Fame 13 year career, including five seasons with the Seattle SuperSonics. Haywood was once married to model Iman. For his Celebrity Jersey Card, Haywood wore the #12 as a flag raiser for the Deahawks. 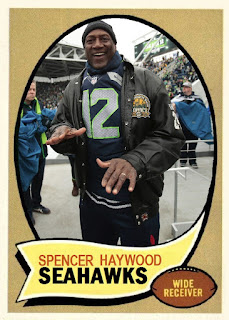 Illinois native Jack Sikma starred at Illinois Wesleyian University before the Seattle SuperSonics selected him in the first round (8th pick) of the 1977 NBA draft. Sikma carved out a Hall of Fame craeer, playing 14 sesons, the first nine with the Sonics. Sikma was a flag raiser for the Seahwks, earning a Celebrity Jersey Card in the process. 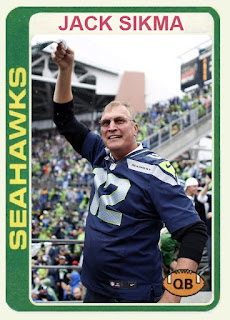