Today I celebrate the birthday of my brother-in-law Dave. I'd reveal his age, but actors always shave off a few years anyway.

Who would have thought Dave would be a thespian? Okay, he's not been the lead actor in any of the productions, but who knows what might happen in the future? Dave somehow finds ways to bypass the normal red tape.

Acting aside, I really appreciate Dave. He's been a supporter and friend, along with being Nancy's husband for all of the years. He's helped me many times and I know he's always there.

Oh sure, I might poke him about his love of Domino's pizza, but it's only in fun and he has fun with it, usually turning it on me at some point anyway. I'll never admit Domino's is great pizza and Dave will never admit it isn't a favorite of his. The long-running bit will probably last our lives/

Happy birthday, Dave. If I was there, I would even share a Domino's pizza with you, but only because it's your birthday. I still say it's only one small step above a frozen pizza. Haha! 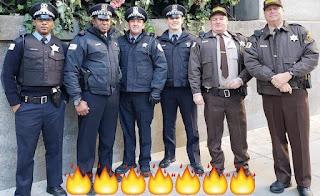 Dave and his acting brethren in Chicago, IL-Summer 2019.
Posted by Johngy at 6:00 AM

Happy Belated Birthday Dave .... hope you had a great day!!

He certainly does find his way around the red tape. However Lou Malnati's is the best pizza!!!