Cards That Never Were is a recurring series in which I create virtual trading cards for players missed in various sets. It is a concept I have borrowed from far too many to list, but I appreciate all of their efforts. You can see a lot of my creations and many more from other more talented folks on the Custom Baseball Cards Facebook group (and there are not just baseball cards there).

After an excellent career at Northwestern State University of Louisiana, Jackie Smith was selected by the St. Louis Cardinals in the 10th round of the 1963 NFL Draft. Smith went on to a Hall of Fame career, playing 15 seasons with the Cardinals, before finishing his career with one season with the Dallas Cowboys. The tight end finally made it to the Super Bowl with the Cowboys in that last season.
Smith made a clutch catch in the 1978 NFC Championship game, but unfortunately it was his play in the Super Bowl that is too often mostly remembered. Smith dropped a pass in the end zone which would have tied the score. The Cowboys went on to lose the game and Smith's play is often cited, although it wasn't the only missed opportunity for the Cowboys that day.
For his efforts, Smith received cards in sets from 1967 through 1976, missing '64-'66 and '77-'79. Early pictures were hard to find. I had to settle for making cards for '66 and '77-'79. For the "career capper" of '79, I made two versions. One shows his infamous Super Bowl moment, but the other is a better shot, more deserving of the HOFer. 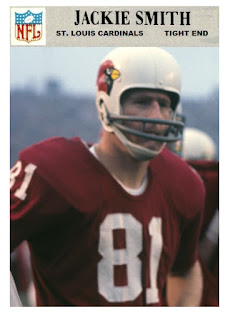 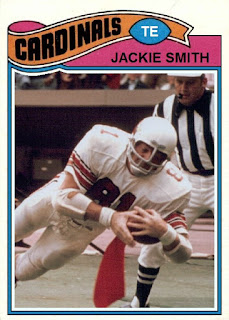 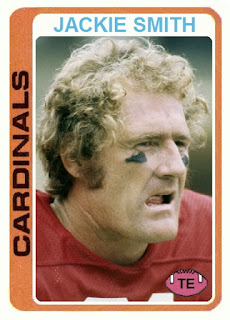 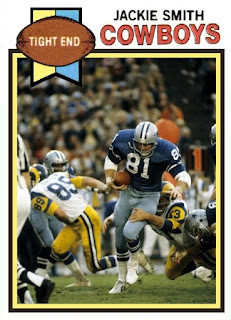 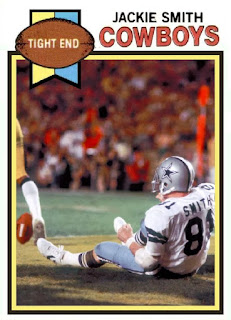 Why do players from the past look so old. Jackie Smith could not be more than 37 (last time he played with Cardinals) but he looks over 55 years old in that Photo.