Celebrity Jersey Cards is a weekly series in which I create virtual trading cards for celebrities wearing jerseys. Today, I feature two New York teams not in the playoffs.

The New York Giants might not be in the playoffs, but former Yankees pitcher Mariano Rivera had plenty of playoff experiences. Born in Panama, Rivera pitched in 96 playoff games, going 8-1 with 42 saves and a 0.70 ERA. Oddly, 42 was also his number. For his Celebrity Jersey card, Rivera wore Eli Manning's #10, instead of hsi usual #42. He was elected into the Baseball HOF in 2019. 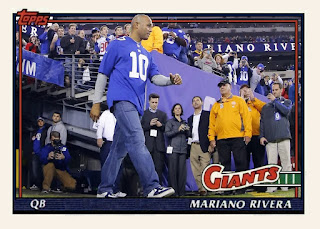 Lawrence Tureaud was born in Chicago, Illinois, but rose to fame as Mr. T. on tv's The A Team. T also had a big role in Rocky III, as well as a being a featured performer in several wrestling events, including boxing "Rowdy" Roddy Piper at WrestleMania II. Why Chicago guy T was wearing a Jets jersey is unknown, but at least he wore Joe Namath's #12. 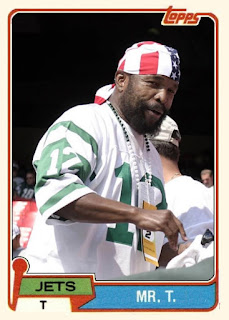