Larry Freda is another friend I have never met. Larry has met hundreds of others though. I always enjoy seeing Larry's social media posts showing the many interesting folks from wrestling and elsewhere.
Several years ago, Larry met The Rock, the original "Rock," aka Don Muraco. Long before Dwayne "The Rock" smelled what we were cooking, Don "The Rock" was carving out an excellent career in wrestling.
Muraco made his wrestling debut in 1970. He wrestled for the AWA and other territorial organizations, before joining the WWF in 1981. Muraco won the Intercontinental title twice, both times defeating Pedro Morales. During his time in the WWF, Muraco was first called "The Magnificent Muraco," but later became "The Rock" during a face run.
He won the 1985 King of the Ring and was inducted into the WWE Hall of Fame in 2004. Muraco retired in 1995.
Larry met Muraco at the Legends of the Ring XIV. The LOR is a great place to meet legendary wrestlers. The next Legends of the Ring event is scheduled for October 3 at the APA Hotel in Woodbridge, NJ. The guest list is starting to grow and it includes Ricky Steamboat, Glenn "Kane" Jacobs and Layla.
For more info on this great fan fest, go to LegendsoftheRing.com. Also, check the Legends of the Ring Fanfest Facebook page for more frequent updates and news. 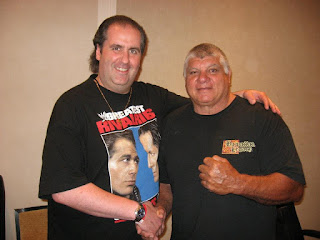