The DePaul Blue Demons softball team was finally back in action. Opening their 2021 season inside the warm confines of the Dome in Rosemont, the Blue Demons started with a big win. The Blue Demons went 3-2 over the weekend but unfortunately ended it with a tough loss.

The weekend started with a big 8-0 victory over Valparaiso. Unfortunately, it ended with an 8-7 loss to Western Illinois, in a game that saw DePaul squander a 7-1 lead. In between, the Blue Demons went 2-1 to make it 3-2 for the weekend series.

There were some nice highlights, including Natalie Halvorson's brilliant pitching performance and some explosive hitting. Some negatives were blowing the lead, occasional shaky defense and spotty pitching. All told though, the good outweighed the bad and things look very positive for the Blue Demons.

DePaul is off until the Coach B Classic on Feb. 26-28 in Carbondale, Illinois. They open their home season on March 20. I'll be covering the team here, on GlobalSportsRadio.com, Patch.com and GlobalTravelerUSA.com.

Fans were not allowed in the Dome over the weekend. Nothing has been announced about fans at DePaul's Cacciatore Stadium. Even if I am not in the stands, I am still happy to have softball back. 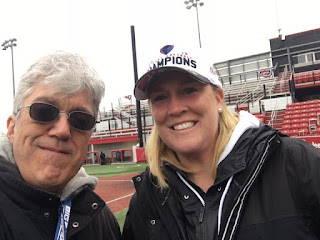