Celebrity Jersey Cards is a weekly series in which I create virtual trading cards for celebrities wearing sports jerseys. Today, celebrating the start of the WWE's WrestleMania, I feature wrestlers repping teams.

Hulk Hogan put the (then) WWF and wrestling in the mainstream with the debut of WrestleMania. Hogan is arguably the most recognized wrestler ever. Hogan's Celebrity Jersey Card completes the four sport Grand Slam for him. It also bends the time continuum , as the Toronto Raptors did not exist at the time of this card's original issue.  time of this card's original issue. 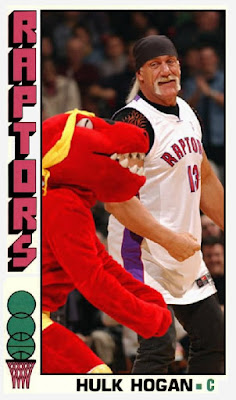 Born in Parma, Ohio, Mike Mizanan has carved quite a career. Starting as a reality television star and transforming himself into a solid wrestler, The Miz has earned everything he has achieved. While he has his share of critics, I think when his career is over, people will look back on it and realized all he accomplished. Miz stayed true to his Ohio roots and donned the Cleveland Cavaliers jersey for an appearance at a game. I don't know the connection to the #40, since nobody really distinguished themselves wearing that number for the Cavs. 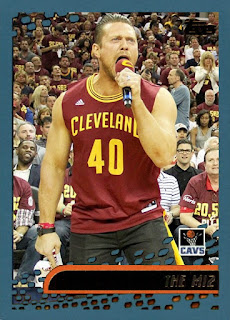