On the Beat With Charli Collier of the Dallas Wings

The WNBA held its 2021 draft last week. With the first pick, the Dallas Wings selected Charli Collier from the University of Texas. I wrote more about the draft at 2021 WNBA Draft Recap for Global Women's Sports Radio.

Collier appeared in a media session right after being drafted and then was nice enough to do another media session early the next morning. Collier seemed to be having a great time throughout the whole experience. She had fun moments with her mom and then was just as fun with the press.

Of course, she answered the usual questions about being the first pick, adjusting to the pro league and stuff like that. Being from Houston and starring at the University of Texas, Collier was ecstatic to be drafted by her home state Wings.

I asked her about the team jelling with so many new faces. The Wings had three picks in the first round. She was honest, stating there would be an adjustment, but in college there were new players every year, too. She talked about the pressures of being the top pick and of competing with the other first rounders, even those on her own team.

The Wings finished last season 8-14 in last place in the Western Conference. They head into the 2021 season with a new coach and several new players. It's too early to predict success, but it's a safe bet to say they will be improved. At the very least, the team made moves to improve. The Western Conference is going to be very interesting.

Go to WNBA.com for more info on the Wings, Collier and the whole league. Also, check here, GlobalTravelerUSA.com, Patch.com and GlobalWomensSportsRadio.com for my recurring coverage. 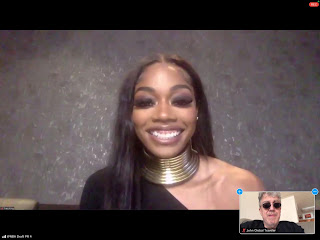