The Connecticut Sun opened training camp with a thin roster. Third year guard Natisha Hiedeman is the "veteran" of camp, a position she relishes and one Coach Curt Miller feels will pay dividends.

With the other team veterans playing in Europe and elsewhere, Coach Miller described the first practice as a "a bit sloppy," but he love the energy and enthusiasm. He stated the usual two hour practice actually went close to three hours because of the extra teaching necessary, but was quick to also stated that isn't a bad thing. The youngsters will get plenty of experience. They will get more time and attention than usual, which is good for the team and for them individually in the long run.

For her part, Hiedeman is embracing her role as "veteran" for now. Just as she usually  approaches veterans for advice and knowledge, she welcomes the younger players coming to her for the same reasons and she is ready to impart her insight. It's a new role for Hiedeman, which harkens back to her junior and senior seasons at Marquette.

A musician in her spare time, Hiedeman said she hasn't produced any new music since last season, but there will be more in the future. She also joked that we will be the first to know.

Lastly, Hiedeman discussed her personality. As someone who doesn't take life too seriously, she carries the same mindset into the arena, whether she is playing or on the bench. Her enthusiasm was a big boost for the Sun last year and she plans on continuing keeping her team loose, while still being a focused competitor.

Rookie DiJonai Carrington came to the Sun via the 2021 WNBA Draft. A standout at Stanford and Baylor, Carrington was the 20th overall selection in the draft. ESPN analyst and WNBA legend Rebecca Lobo felt she is the perfect fit for the Sun, because "she's a tough, physical player who can contribute right away."

With most of the team veterans away, more eyes will be on Carrington than usual, but she's fine with that. She just wants to soak up all the knowledge from the coaches and gain experience from the extra time she might get right now. Like Hiedeman, she is making the most of this time in camp.

Soon, the Sun will have their full roster. Until then, Coach Miller will focus on the youth in camp. Because they are playing elsewhere, the veterans will come into camp ready to go. Once the vets arrive, it will be business as usual.

Go to WNBA.com for more info on the WNBA and the Sun. Check the interview at On the Beat With the Connecticut Sun 04/25/2021. 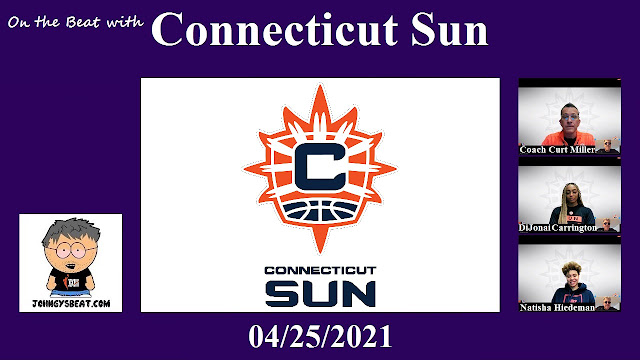