Celebrity Jersey Cards is a weekly series in which I create virtual trading cards for celebrities wearing sports jerseys. Today, I continue working my way alphabetically through all MLB teams. I usually feature two celebs with some sort of connection (although I stretch that concept a bit), but today I feature three who are connected.

Born in Mesa, Arizona, Danielle Fishel started acting in commercials and doing voice-overs, before she rose to big fame as Topanga in Boy Meets World. Everyone loved Danielle as Topanga, although I was a bit old at the time. I'm happy to report she was one of the coolest celebs I ever met. At Wizard World a few years ago, I did a quick interview with her, followed by a selfie, of course. Every day after that, she called me over to take a new selfie. Fishel took the field at Dodger Stadium when the team honored her and her co-stars on Girl Meets World. Fishel's Celebrity Jersey Card is the first one to show a celeb in the catcher position with a mitt. 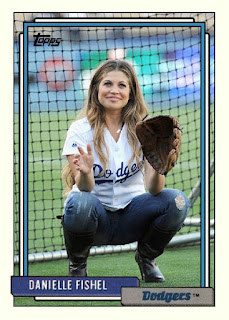 Ben Savage portrayed Cory Matthews, the love interest of Fishel's Topanga character on Boy Meets World and her husband on Girl Meets World. Ben is the younger brother of fellow actor Fred Savage of The Wonder Years. Ben is a Chicago native, but donned the Dodger Blue for the special night at Dodger Stadium with his co-stars. Since Fishel was a catcher on her Celebrity Jersey Card, Ben logically had to be the pitcher. They made a great pair, even if it was only on television. 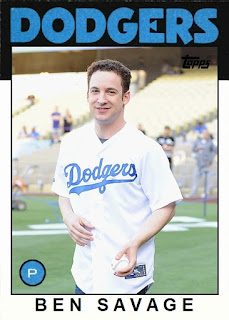 Fred Savage rose to fame as Kevin on television's The Wonder Years. He also appeared in The Princess Bride, co-starring wrestling legend Andre the Giant. Fred has gone on to become a director and producer. Like his younger brother Ben, Fred threw out a first pitch at Dodger Stadium, although it was a different night. Like his brother Ben, Fred also earnd a Celebrity Jersey Card in the process. 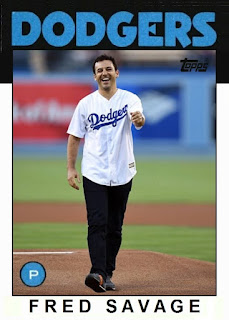