On the Beat With the Chicago Blitz

Women's football was back in Chicago, although briefly. A couple weeks ago, the X League Chicago Blitz held an open scrimmage for fans at the SeatGeek Stadium Dome in Bridgeview, Illinois. I was there “On the Beat” soaking up the action.

In 2019, with the rebrand, the Bliss became the Chicago Blitz. Sidney Lewis was named the new coach. Coach Lew had a few veterans like DeAnna Hightower and Javell Thompson to aid the transition, but he relied on mostly new players. This year was going to be an exciting year for the Blitz and I couldn't wait to watch women's football again.

A few weeks back, the Blitz announced they were having a scrimmage and it was open to fans. Of course, I was going to be there. Once again though, the ongoing pandemic reared its ugly head, causing the debut season to be postponed until 2022. Despite the disappointment of the postponement, the Blitz still held their scrimmage, to the delight of the many fans who watched from the sidelines of the Dome.

The Blitz ran through basic drills for about an hour. Next the team ran offensive plays for about 30 minutes, then switched up some players and ran more offensive pays for another half hour.

After the two hours on the field, the players were individually announced to the cheers of those in attendance. As the team left the field, I was able to get short interviews with Coach Lew and five players.

Coach Lew talked about why he wanted to coach women's football, what he enjoys the most about the league and why the players and the action are top notch. Coach Lew has a long coaching resume and is a great leader, both on and off the field. I really looked forward to what he would do with the team.

Next up was rookie Allie “Diesel” Koop. If you wonder why she is called Diesel, look at her on the field. I saw her carry a few players with her as she advanced the ball. Unbelievably, she is new to football. She has been a body builder, as her physique indicates and is heading into her first competition in a few weeks.

I got a three-fer interview with Brittany Baker, Victoria MDC and Stephanie Daniels. The athletes talked about why they want to play football and also their athletic backgrounds.

Last, I talked to team veteran DeAnna Hightower. DeAnna talked about the sisterhood on the team and being the elder statesman. I don't know her age (and I wouldn't reveal it if I did), but she proved she is as capable as others much younger.

The X League has a history filled with twists and turns, but the one consistent thing is the athletes. As Coach Lew stated so well, these women are elite athletes. Most have excelled at high levels in various sports, like Stephanie Raymond who played with the WNBA Chicago Sky.

These athletes play for the love of the game. They practice for many months, just to play a few regular season games. Those practices are legit battles, too. Just look at Koop in our interview. Clearly she worked her tail off at the scrimmage. These women don't have a cruising gear. It is all out.

It's a shame these women and the sport don't get more exposure. Every friend who attended a Bliss game at my urging always enjoyed the experience and returned. This is why I am happy Global Women's Sports Radio was started. I get to cover women's sports and share all with our viewers.

Thank you to Coach Lew for the invitation to the practice. Thanks to all who gave their time for our interviews. Despite the season's postponement, I don't think we've heard the end of the Blitz for 2021. Rest assured, whatever they might do, Global Women's Sports Radio will be there.

The interviews can be found at On the Beat With the Chicago Blitz. Check the Blitz and individual players on social media. 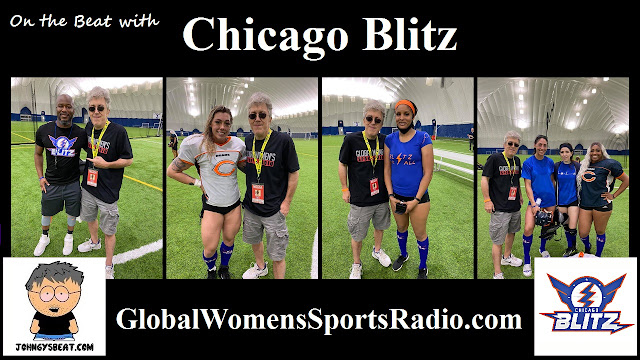