The dream ended for Team USA softball as they fell 2-0 to Japan. Japan takes the gold medal, while USA settles for the silver medal.
Cat Osterman started for USA, but Ally Carda and Monica Abbott also took a turn on the mound. Those three elite pitchers only gave up two runs (one in each the fourth and fifth innings), but that was enough for Japan.
Japan's Yukiko Ueno pitched six scoreless innings, allowing only two hits, while striking out five. USA had a couple mild scoring chances, but Japan always rose to the occasion and ended the threats.
Team USA had hoped to avenge their loss to Japan in the 2008 Olympics, but it wasn't meant to be. While USA had dominant pitching, the offense just wasn't there. They scored just nine runs in the six games, never plating more than two.
The best chance for Team USA was ended with a fantastic double play. A star of two previous games, Amanda Chidester hit a liner that bounced off of the third baseperson's glove, but the shortstop snared it and fired it to second to complete the double play and dash USA's scoring opportunity.
Both teams finished 5-1 in the Olympics. Both teams only lost to the other team. Yet, in the end, Japan came away with the gold.
Osterman spoke of the disappointment, “Obviously, we’re a little bit disappointed,” said Osterman. “You get to the gold medal game and you have your eye that prize, and to not accomplish that – it stings.” Disappointed, but not defeated, Osterman looked at the positives, “This was a tremendous Olympic Games. I think the goal in the long run is to not overlook everything we accomplished on our way to the gold medal game. We've done a lot of things that we're proud of and the end result is not what we wanted, but the journey was incredible and we played some incredible softball here.”
Softball will not be at the Olympics in 2024, but is expected to return in 2028 in Los Angeles.
Despite the loss, I am happy Ally got to make an appearance. It's a memory she will always have and one well-deserved.
I congratulate Team USA on their silver medal. I also salute Japan for their gold, Canada for their bronze and Australia, Mexico and Italy for being great competitors. 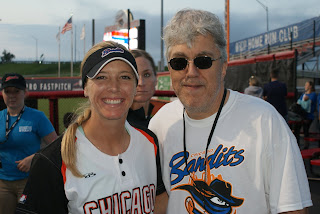 Great gold medal game. Talk about being in the right place at the right time on that double play. That was awesome! And this rivalry between these two teams is great for the sport. Already looking forward to 2028.

Thanks for stopping by. I just wish softball was in the 2024 Olympics, but at least most of the women will be playing somewhere and we can watch that.