Celebrity Jersey Cards is a weekly series in which I create virtual trading cards for celebrities wearing sports jerseys. Today, I go old school as I continue working my way alphabetically through all MLB teams.
Born in California, Keith Carradine is part of a legendary entertainment family. One of his first roles was a part on television's Kung Fu, playing the younger brother of his brother's character. In addition, to his lengthy acting resume, he is a Golden Globe– and Academy Award–winning songwriter. He also appeared in the music video for Madonna's single "Material Girl." It was his role in A Winner Never Quits, about Pete Gray, the one-armed man who played in the majors, that earned Carradine a Celebrity Jersey Card. Since Carradine is wearing a St. Louis Browns jersey, as Gray did, I made the card a Browns card, instead of the Baltimore Orioles. 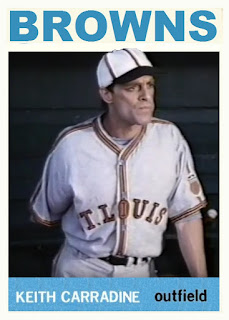 In 1916, Bill DeWitt was an enterprising teenager selling pop in the stands at Sportsman's Park. Soon he was hired to work in the front office of the St. Louis Cardinals. He eventually worked his way up to vice president/treasurer, before moving on to the St. Louis Browns. He eventually became part-owner of the Browns. He also was part-owner of the Cincinnati Reds, Detroit Tigers and Chicago White Sox at times. His son Bill Jr. is the majority owner of the Cardinals, while Bill III is team president. Young Bill's Celebrity Jersey Card features Babe Ruth. Bill's card design din't show team designations, but I would have also used the Browns if it did. No offense to the Orioles, but I will never pass the chance to show previous versions of any team. 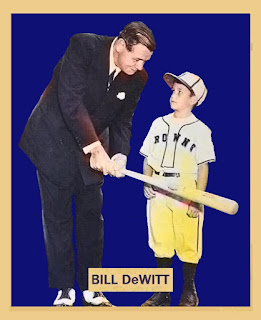