The legendary horror host Svengoolie is one of the yearly highlights at Flashback. Sven will be signing autographs and posing for pictures, but he will also host the Sinister Visions Costume Contest on Saturday afternoon. As of this writing, this is the first scheduled appearance for Svengoolie and it is sure to be a major draw. After 40+ years of entertaining fans, Svengoolie is more popular than ever. If you haven't met Sven yet, Flashback Weekend is the perfect place.

There are many vendors promoting and selling cool stuff. Authors, artists and creators of all kinds display their creations. One of my favorites is James Azrael.

James is one buy, talented man. He's a producer, actor, musician, director and more. He is the owner, operator and Head Curator of The Horror and SciFi Prop Preservation Association (HSPPA). He is also the co-owner of Spooky's Swirls, a horror-scifi themed, gluten-free bakery with a museum of actual screen used props and wardrobes on display.

His latest endeavor is Cineloggia, where he is co-owner and Head Curator. Billed as a “Silver Screen Experience,” Cineloggia is the only movie prop and memorabilia gallery museum in Las Vegas.

Always entertaining, I have interviewed James a few times The last time focused on It's Just a Game, a fantastic horror film co-produced by James. He also played a minor, but very cool, role in the film. I really loved this film. The acting was real. The story was tight. I think it is destined for cult classic status.

I am sure James will be willing to discuss any and all of this. He's extremely personable (and not just to pesky reporters like me). I wonder if he'll have any Spooky Swirls delights flown in for the occasion.

James is just one of the many great vendors appearing at Flashback Weekend. I have met so many cool creative people there over the years.

Other events scheduled for the weekend include screenings, panels, Q&A's, Saturday's afterparty and much more. It really is a weekend of fun.

I'll be going with my pal Cuzz Gekas and I am sure to run into many other friends attending Flashback. It's three weeks away and I can't wait. Check FlashbackWeekend.com for more info. 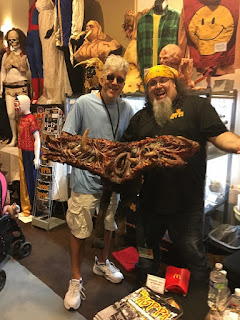