I was "On the Beat" as the Los Angeles Sparks and the Seattle Storm held a joint media session on Sunday, prior to their night game. Joint media sessions are unusual, nut this was a unique situation. Sisters Karlie Samuelson (Los Angeles) and Katie Lou Samuelson (Seattle) were facing each other for the first time.

Both Samuelson sisters started the game for their teams. Karlie won the mini- battle, scoring six points with three rebounds snf an assist, while Katie Lou had two points and three rebounds. Katie Lou got the overall win though, as the Storm won by 10 points.

In the press session, obviously all the talk was about them facing each other. The topic remained the same, but many angles were covered. Each talked about what the other meant to her. The pair talked about their parents and joked about them wearing split jerseys to support both daughters as they did in college.

It wasn't the most serious of all media sessions, but it was a special one. It was definitely a feel good moment for the Samuelson family and for all sports fans.

I have always been fascinated by sports families. I have interviewed several family pairs, but I have never interviewed family members together. I never thought I would have my first in the WNBA.

That session can be found at On the Beat With Karlie & Katie Lou Samuelson. Also, check back here for my recurring coverage of the WNBA. 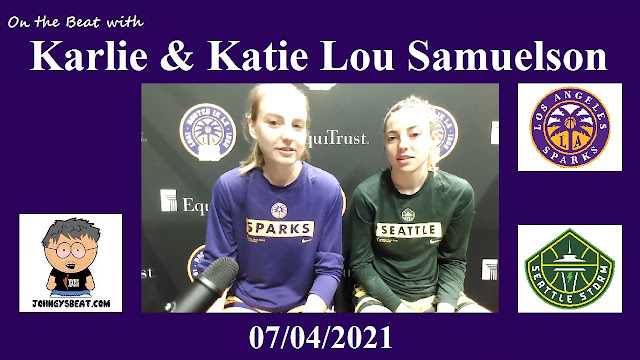