The Seattle Storm held a media session prior to their night game against the Atlanta Dream. Epiphanny Prince and Ezi Magbegor took part in this unusually short press session.

I started the session by asking Prince about when she scored 113 points in a high school game. Princes explanation surprised me a bit. She might have had a hot hand, but I would have thought scoring 113 points was more of a concerted effort, rather than just in the flow of the game. It was interesting and impressive either way. That performance broke the girls' national prep record previously held by Hall of Famer Cheryl Miller.

Talk got a little more serious when Prince discussed the play of her teammate Sami Whitcomb. Despite an impressive season, Whitcomb did not make the All-Star team, but that was really just a numbers game. There are only so many roster spots. Some great players will naturally be left off. Later, Magbegor would echo those sentiments in her media session.

I started the portion with Magbegor by asking about her shoe she designed for the "Kicks For Equality" campaign. A raised fist and text reading "Black Lives Matter" are the main elements. Both represent the cause important to Magbegor. The shoes will be available for auction on the Storm's website.

Magbegor spent a good part of her session discussing the Dream. She gave the keys to the game and much more. It was a very insightful bit.

Seattle went into last night's game tied with Las Vegas for first place in the Western Conference. They were on a two game losing streak, after winning five in a row. Still, their 13-4 record puts them (and Las Vegas) four games ahead of Minnesota. Meanwhile, their opponent last night, Atlanta, had lost three of their last four. The 91-88 win was what Seattle need to get back on track.

You can find the interview at On the Beat With the Seattle Storm 07/02/2021. Also, check back here for my coverage of the WNBA. 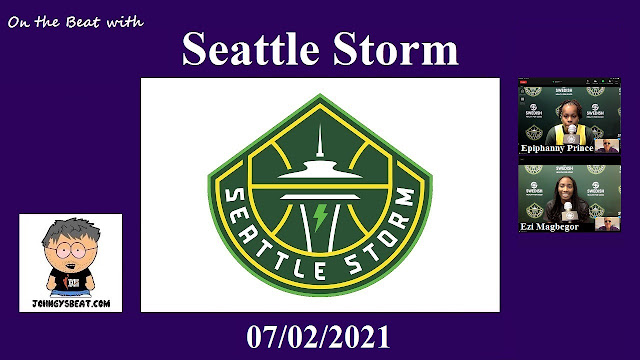