On the Beat With Val Capone

I can't believe it, but I first met Val Capone eight years ago at the UIC Pavilion, when she was skating with the Windy City Rollers. Val was a big part of WCR as a skater and broadcaster for more than a decade.

Established in 2004, WCR is Chicago's first flat-track roller derby league. A founding member of the Women's Flat Track Derby Association, the league is real sport, operating with rules and a scoring system. The only thing made up are the fun player names, like Val Capone. Val and her #89 jersey (for the legendary Mike Ditka) are as Chicago as can be.

In recent years, Val turned her attention to another of her passions, by becoming a broadcaster for local wrestling promotions. It was a smooth transition, which shouldn't surprise anyone. Val brings her dedication and focus to all she attempts and rises to any challenge.

Unfortunately, one of her challenges is her battle with Crohn's Disease. Despite surgeries, setbacks and other nasty effects, Val refuses to let it beat her. She makes the necessary concessions and adjustments, but it isn't stopping Val from living her life to the fullest and being an inspiration to all. The workout and practice schedule for WCR is grueling at times, yet Val worked hard, took the bumps and gave it her all.

Having not interviewed Val in several years, an update interview was long overdue. At the recent softball game pitting Pro Wrestling Tees against All Elite Wrestling to benefit PAWS, I finally had the opportunity to get that update interview.

We covered a little bit of everything, including her roller derby days, her position at the broadcast booth, Pro Wrestling Tees, dealing with Crohn's Disease and more. I couldn't take too much of her time, because she had to get ready for her catching duties. With Val seemingly constantly on the move, I was happy to steal a few moments with her.

Through her accomplishments, Val inspires all around her. She is a perfect example of following a passion and making it happen. She loved wrestling and found a way to become part of that world, without delivering body slams. She is living with Crohn's Disease, but not being defeated by it. She sets an example all can follow, even an old reporter like me. 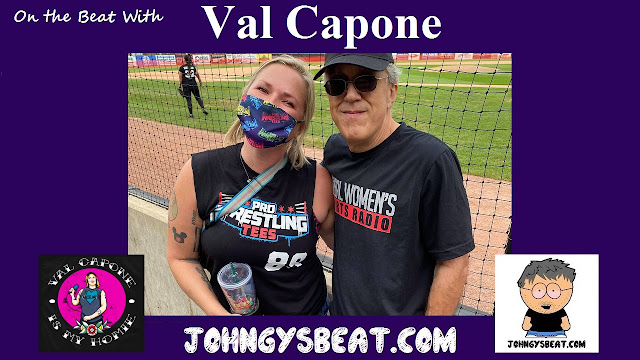 What an inspiring story! Hard to fight all the "auto-immune" diseases people have, but she is pushing through it and going after her passion in life! Go Val!!