Cards That Never Were is a recurring series in which I create virtual trading cards for players missed in various sets. It is a concept I have borrowed from far too many to list, but I appreciate all of their efforts. Other creations of mine and many others can be found in the Custom Baseball Cards Facebook group (which is not just baseball cards, despite the name).
After playing his collegiate ball at Wake Forest, QB Norm Snead was selected by the Washington Redskins in the 1st round of the 1961 NFL draft and the 3rd round by the Buffalo Bills in the 1961 AFL draft. After signing with Washington, he played three seasons there, before joining the Philadelphia Eagles for seven seasons. Then he moved on to the Minnesota Vikings for one season, the New York Giants for 2+ seasons, the San Francisco 49ers for 1+ seasons and one final season back with the Giants. He threw for 30,979 yards, with 196 TDs and 257 interceptions.
For his efforts, Snead received cards from Topps or Philadelphia from 1962 through 1977, leaving only a 1977 "career capper" missing. On a side note, Snead had two versions of his 1974 Topps card. One was the regular issue and one was a special card for the Pro Draft football game.
I found a nice action shot and made a 1977 Topps card for Snead. That's running back #33 Doug Kotar with the backwards photo bomb. 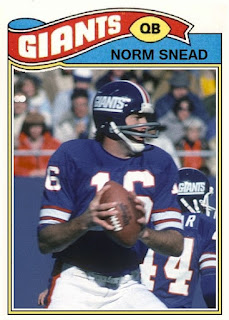