James Raschke was born in Nebraska but gained fame in wrestling rings around the world as Baron Von Raschke. The master of "The Claw" won several titles during his career, although most were in tag teams. He won a few singles titles in smaller organizations. He is legendary, especially in the midwest. At a convention a few years ago in Milwaukee, Von Raschke was one of the most popular celebrity guests. Even sports heroes like Bobby Hull and Fergie Jenkins wanted a pic with him. Von Raschke demonstrated his clawlike grip on a baseball for the Minnesota Twins in one of the few actual wrestling holds depicted on a Celebrity Jersey Card. 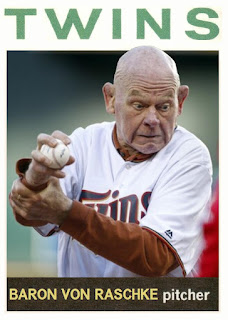 South Dakota native Brock Lesnar was a standout amateur wrestler in high school and college. He spent his junior and senior years on a scholarship at the University of Minnesota. Lesnar tried out for the Vikings and dabbled in MMA, but he found his real success in the wrestling ring. Many dislike his part-time status and attitude, but his accomplishments can't be denied. He has won a WWE singles title eight times. Lesnar looked a bit pained as he tossed out a first pitch for the Twins, but he still gets a Celebrity Jersey Card for his effort. 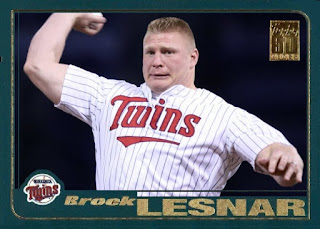