Today is my pal Jim's birthday. As a preview of next week's Statues Week, I feature Jim and me with the Juan Marichal statue.

Born in the Dominican Republic, Juan Marichal went on a 16 season Hall of Fame career as a pitcher in Major League Baseball. Marichal came up with the San Francisco Giants, winning 238 games over his 14 years with the club. He finished his career with partial seasons with the Boston Red Sox and Los Angeles Dodgers. He retired after the 1975 season and was inducted into the Baseball Hall of Fame in 1983.

The Marichal statue was unveiled in 2005. Sculpted by William Behrends, it was made of bronze and depicts Marichal in mid-delivery, with his signature high leg kick. Behrends also sculpted the statues of Willie Mays, Orlando Cepeda and Willie McCovey, all located at AT&T Park.The statue stands outside Lefty O'Doul Plaza at AT&T Park.

My pal Jim and I got our picture with the Marichal statue on one of our "Boys of Summer" baseball trips. The Giants beat the rival Dodgers 5-0 that day!

Back to Jim. He's been a great friend for 20+ years. We've had a ton of laughs, seen a lot of baseball games, enjoyed many meals and more over the years. If I ever make statues of my friends, Jim would certainly get one. 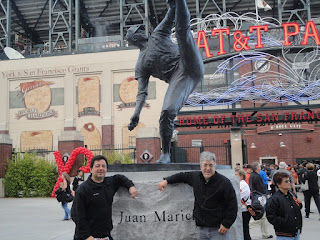