Fellow journalist Mike Pankow and I have run across each other many times at events. He is the creative force behind Windy City Slams, a website and podcast. I have even had the pleasure of helping Mike on a few interviews.

Obviously, Mike has met many wrestlers. Today, he is featured with a young wrestler he met on her way up. I'll let Mike explain.

"I was fortunate enough to get a pic and autograph with a local wrestler named Elayna Black at a Freelance Underground show in Joliet. Fast forward a year later and Elayna is now in NXT and known as Cora Jade. Amazing journey for sure!"

The 20 year old Jade was trained at the Freelance Wrestling Academy by Bryce Benjamin, among others. Jade spent time in Impact Wrestling and All Elite Wrestling before joining the WWE.

While Mike didn't "discover" Jade, he definitely was one of the first to cover her and showcase her to wrestling fans through his work. Jade is just one of dozens (hundreds?) of wrestlers Mike has covered on WSC.

Go to WindyCitySlam.com to see all of Mike's wrestling stories and interviews. Prepare to spend some time there, because WCS is loaded with great stuff. 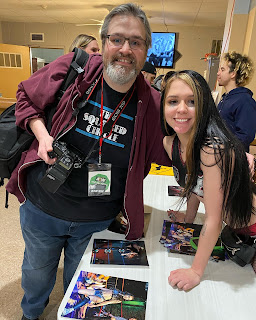