Cards That Never Were is a recurring series in which I create virtual trading cards for players missed in various sets. It is a concept I have borrowed from far too many to list, but I appreciate all of their efforts. More of my creations and a lot of other great creations can be found in the Custom Baseball Cards Facebook group (and not just baseball cards).

Defenseman Larry Carriere was selected by the Buffalo Sabres with the 25th pick in the 1972 NHL draft. Carriere made his NHL debut in the 1972-'73 season. After two seasons, he was traded to the Atlanta Flames. After a season and a half with Atlanta, he was traded to the Vancouver Canucks. Early in his second season with the Canucks, he was traded to the Los Angeles Kings, who released him shortly after acquiring him. He signed back with Buffalo for a few games, but his career seemed over the '77-'78 season. Carriere would come back briefly, appearing in two games with the Toronto Maple Leafs in the '79-'80 season. For his career, Carriere appeared in 366 games, scoring 16 goals with 74 assists.

Topps/OPC gave Carriere cards in every set from '72-'73 through '78-'79. (An odd side note is the first card was a sort of pre-rookie card, as Carriere had not yet made his NHL debut.) That left a career capper for his two games with the Maple Leafs. While searching for a good picture, I stumbled upon The Compleat Toronto Maple Leafs Hockey Card Compendium. This site is amazing. It has everything you would ever want to see about the Leafs, including a virtual Leafs card for Carriere.

Knowing I could not improve on his mastery, I did not try to make my version. I am just showcasing his crafty work. 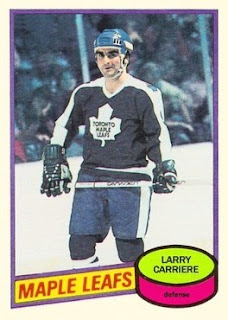