England born Norman Smiley made his wrestling debut in 1985. While he won several titles in his career, he is probably most known for winning the WCW Hardcore Championship twice. It was a title Smiley reluctantly won and defended in very protective gear, as seen in the Celebrity Jersey Card I created. In this instance, Smiley was in full goaltender's gear, except for the mask, as Brian Knobbs of the Nasty Boys prepares to wallop him with a trash can. 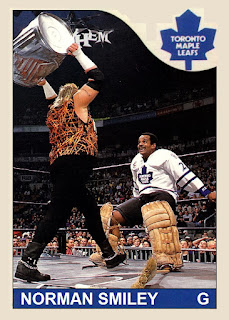 Born in Canada, Pat Patterson would go onto have a lengthy career in the WWF/E. He started as a wrestler and eventually became a fixture behind the scenes. He "won" the first Intercontinental tile in a fictitious tournament in Rio de Janeiro, something that could never happen today with the internet. Patterson was one of the first openly gay wrestlers (possibly the first). For his Celebrity Jersey Card, Patterson is wearing the sweater of his hometown Montreal Canadiens. 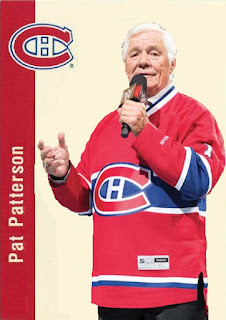 Norman Smiley was aptly named, as he always brought a smile to my face. Comedy acts in wrestling don't always work, but his usually did.