On the Beat With Morgan Howe

Yesterday, I interviewed softball player Morgan Howe for Global Women's Sports Radio. We had a lot of fun in the interview, but we also covered a serious topic. The interview is at On the Beat With Morgan Howe.

After college, Morgan played in the first two seasons of Athletes Unlimited Softball. Morgan talked about adapting to the unique structure and scoring system of the league. She gave a quick summary of the basic weekly schedule fo the league.

With the league based in Rosemont, just west of Chicago, I asked Morgan about sightseeing and food in Chicago. When she talked about pizza, she named one of Chicago's best (and one of my favorites).

Then the conversation turned serious as Morgan talked about the Step Up For Mental Health organization. In AU Softball, players pick a charity to benefit from their play, one of the very special parts of AU softball. Morgan was open about some of her challenges.

Step Up For Mental Health's mission statement is “To educate, fight causes and change minds about mental health and its impact on families.” Services include helpline support, programs, peer support, classes, webinars, podcasts and more.

The interview ended with Morgan playing for Women's Pro Fastpitch, a new pro softball league starting soon. This season will be filled with exhibition games, but it gives softball players more opportunities and options.

I really appreciate Morgan's time in this interview. I wish her luck in her upcoming season. 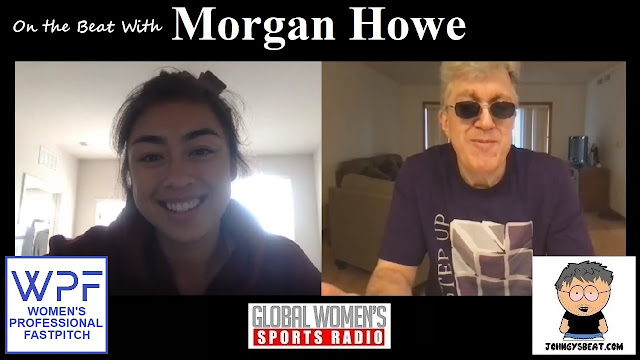