Cards That Never Were is a recurring series in which I create virtual trading cards for players missed in various sets. It is a concept I have borrowed from far too many to list, but I appreciate all of their efforts. More of my creations and many great creations of others can be found in the Custom Baseball Cards Facebook group (and not just baseball cards).
After a successful collegiate career at St. Francis University, Norm Van Lier was selected by the Chicago Bulls in the 3rd round of the 1969 NBA draft. He was immediately traded to the Cincinnati Royals. He led the NBA in assists in the '70-71 season, but was traded back to the Bulls in the '71-72 season. "Stormin' Norman" became one of the most popular Bulls, as well as making three All-Star teams. He finished his NBA career with one season with the Milwaukee Bucks in '78-79. All told, he played in 746 games during his 10 seasons, averaging 11.8 points, 7 assists and 4.68 rebounds per game.
For his efforts, Topps gave Van Lier cards in every set from '70-71 through '78-79. That only left a "career capper" from his year with the Bucks. 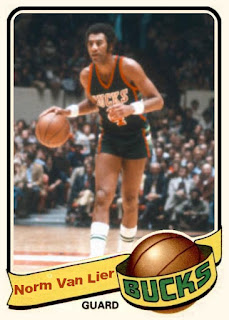