Cards That Never Were is a recurring series in which I create virtual trading cards for players missed in various sets over the years. More of my creations and thousands from others can be found in the Custom Baseball Cards Group on Facebook. It's not just baseball cards.

After starring at Arizona State University, catcher Don "Duffy" Dyer was selected by the New York Mets in the 1st round 9 (ninth overall) of the 1966 MLB June Draft. Dyer made his Major League Baseball debut with one game in 1968. He split 1969 between the Mets and their minor league affiliate. In 1970, Dyer was up with the Mets for good. After the 1974 season, he was traded to the Pittsburgh Pirates for Gene Clines. He signed with the Montreal Expos for the 1979 season, then was traded to the Detroit Tigers for Jerry Manuel before the 1980 season. The Tigers released Dyer early in the 1981 season.

For his efforts, Topps gave him cards in every set from 1969-1981. That left a 1982 "career capper" missing. I found a picture and with minor editing for the signature, filled that void. 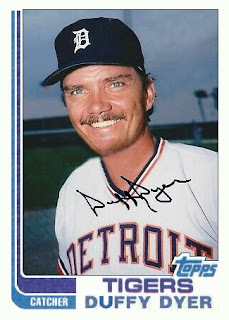