My coverage of Athletes Unlimited Softball Season Three continues on The Every Day Fan with AU SB Week Three Draft Recap. I look at the teams and the leaderboard implications.

On week One, I caught up a bit with former Chicago Bandits player Hannah Flippen. Currently sitting in 7th place in the standings, Flippen is positioned to make a move upwards.

Flippen was a star player at Utah, before playing professionally. She was also a member of Team USA 2016-18. Her mother was an All-American at Utah State and helped the Aggies to two national titles.

During her time with the Bandits, I had a fun exchange after one particularly hot day. When talking of the game, I said "at least the game was short." Flippen thought I said she was short. I quickly restated I was referring to the weather and we had a big laugh.

It's great seeing Flippen and all the players, especially former Bandits, back on the field. With the unique scoring system of AU, I still waffle on how to cheer, but I do lean towards rooting for my former Bandits, like Flippen. 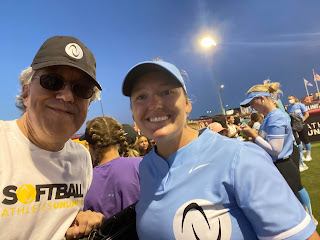