My podcast partner Tommy Else and I are back with Pinfalls with a twist. On Pinfalls RETRO: WWE SummerSlam 2002, we do a deep dive into the PPV from 20 years ago. With it being the 20th anniversary of this historic WWE PPV, we felt it was the perfect time to debut our new show.

The full card was:

Test vs. The Undertaker

The Rock (c) vs. Brock Lesnar with Paul Heyman

Obviously, we did not make our usual predictions (although I wanted to do so). Instead, we recapped the leadup to the matches, cited match highlights and gave our thoughts on all. We even covered the referees, announcers and match lengths.

We agreed this was one of the best SummerSlam cards top to bottom. We even agreed on the weakest match, which we still felt was top notch.

In addition to the matches we covered the other highlights and lowlights of the backstage segments. With a face Stephanie McMahon as GM of SmackDown and heel Eric Bischoff as Raw GM, there were a few bits of them interacting. Trish Stratus, Lillian Garcia and Howard Finkel also made an appearance.

Find Pinfalls RETRO: WWE SummerSlam 2002 on YouTube, The Every Day Fan Sports and The Johngy Or Else podcast. We hope you enjoy this Pinfalls RETRO video. We also welcome requests for other older PPVs, if you have any you'd like us to review. 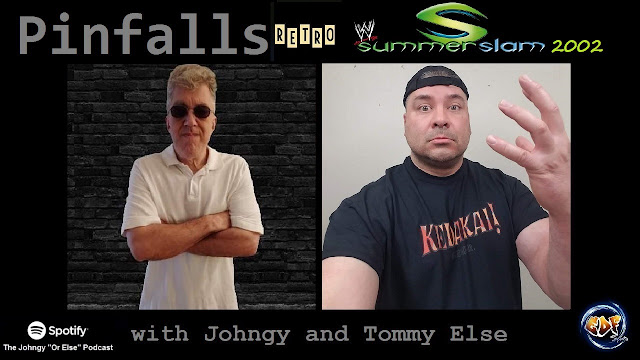