Celebrity Jersey Cards is a weekly series in which I create virtual trading cards for celebrities wearing sports jerseys. Today, I continue my alphabetical march through all MLB teams.

Born in Ohio, Russell Wilson starred at NC State and Wisoncin before being drafted by the Seattle Seahawks in round three of the 2012 NFL draft. A nine-time Pro Bowl player, Wilson led the Seahawks to the NFL title in Super Bowl XLVIII. Wilson was traded to the Denver Broncos after last season. He actually wore a Colorado Rockies jersey before wearing a Broncos jersey and earned a Celebrity Jersey Card in the process. 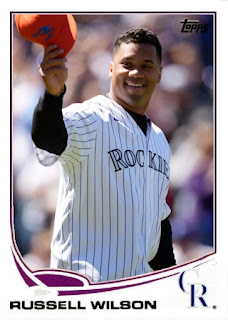 Will Barton was born in Baltimore and played college basketball for Memphis. The Portland Trailblazers selected him in the second round of the 2012 NBA draft. Midway through his third season, he was traded to the Denver Nuggets. After last season, he was traded to the Washington Wizards. Sometime during his stay with the Nuggets, he threw out a first pitch for the Rockies to earn his Celebrity Jersey Card. 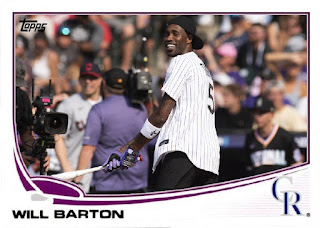