When I last featured fledgling wrestler Cam Raithel, she had not wrestled an official match. Today, I feature Cam again, but it's not quite the same Cam.

Cam appeared on Episode 4 of The Johngy "OR ELSE" Podcast. Recently, she made another appearance or should I say Regan Lydale made the appearance. A lot happened between the appearances, most notably Cam developing Regan, her wrestling alter ego and Regan wrestling several matches. Cam/Regan discussed all of it.

Cam and Tommy made me realize something interesting about name changes. I always thought they would want to wrestle under their given name. I didn't even think they might want to develop another personality or an extension of their personality.

Cam talks about the reasons behind her name change and how she came up with the new name. Both are interesting tales., as is the rest fo her story.

I am very excited to be following Cam's journey from the beginning. As Tommy states, she will go as far as she wants in the world of wrestling. She has the look, ability, charisma and attitude to go on to a bright future.

Check out the video on The Johngy "OR ELSE" YouTube channel or listen to it on Spotify. Check back here as I provide recurring updates on her career. 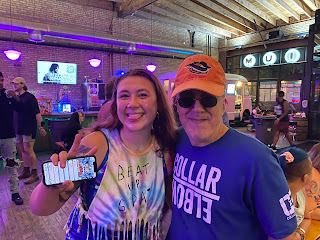