As a recruiter and coach, Bruno is highly successful, as his record and Hall of Fame induction would indicate. The Blue Demons are scheduled to open their 2022-23 season November 9, hosting American University at Wintrust Arena.

After an excellent playing career at DePaul, Bruno had a couple stints coaching high school ball, before taking over DePaul for the 1976-77 season. After two seasons, he went on to coach the Chicago Hustle pro team followed by several season as men's assistant coach at Loyola (1981-88). He rejoined DePaul as women's basketball head coach for the 1988-89 season and has been leading the team ever since.

DIBS hasn't had that type of success. I have previously written about my dislike of the name DIBS (Demon in Blue Suit). I'll move on to Peevy.

A graduate of Montevallo in Alabama, Peevy has a lengthy resume in Media Relations and Sports Information. He joined DePaul in August 2020, after 12 years at Kentucky.

Peevy and Bruno have challenges as they enter the 22-23 season. DePaul lost a few key seniors, but they also saw a freshman have a breakout season. No matter what though, I am certain Bruno will lead his team to another successful and exciting season.

For more info on the team, go to DePaulBlueDemons.com. Look for my recurring coverage here, GlobalTravelerUSA.com, Patch.com and TheEveryDayFan.com. 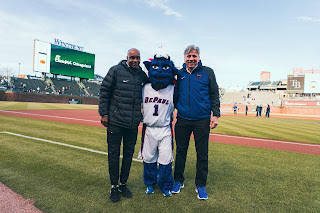