On the Beat With Jade Austin of the Chicago Blitz

X League Chicago Blitz safety Jade Austin had an interesting season. Preseason reports called her “the most complete safety” in the league. A few months later, she fulfilled that promise hoisting the X Cup, while being named the championship game MVP. Yesterday, I talked to her about the amazing season and more at On the Beat With Jade Austin for EveryDayFan.com.

A native of Wisconsin, Austin played a lot of amateur sports, but never played competitive football until she tried out for the Blitz. A few years back, that tryout probably would have been with the Green Bay Chill, but with the Chill gone, Austin crossed the border to pursue her football goal. Wisconsin's loss is Chicago's gain.

The pandemic derailed her journey, as the X League went on hiatus. When the league returned, Austin and the Blitz were more than ready. Despite the lack of games, the Blitz stayed in game mode, preparing for the return.

Austin talked about the challenges and advantages of the long wait for football to restart. As is the history of the Blitz (Bliss), the team is known for its preparedness. She also candidly discussed the small amount of games last season and we both agreed, we hope for more games next season.

Similarly, Austin talked about the preseason appreciation she received. I questioned if the high praise and expectations put more pressure on her or her opponents. Austin discussed both possibilities. She stated she felt her game did not fully come together until the championship game though. The X Cup MVP trophy shows she did fulfill expectations.</p>

As I did when I interviewed Emma Vanderheyden, her Blitz teammate, I had to joke a bit about championship rings, as I showed off my 2014 ring, courtesy of former Coach Keith Hac and the 2014 team. Austin and the rest of the team have not received their 2022 rings yet, but I'm sure the shiny jewelry will be well-received when they do.

I ended with the big question of her return in 2023. Blitz fans will be happy to know Austin, like Vanderheyden, plans on returning to defend the X League title. After I stated my intention of seeing her at practice next season, she joked we can compare rings then.I thank Austin for her time and consideration. I also appreciate her part in bringing another championship to Chicago. Check back here on The Every Day Fan for more similar interviews and our coverage of the X League. 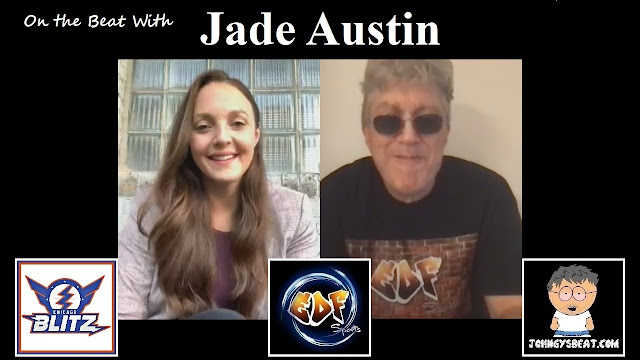