Covering softball has brought me so many friends. Today I am featuring two of my favorites.

Don Martukovich is a big fan of softball. He logs in many miles attending games and take literally thousands of pictures. He has been kind enough to allow me to use some of his captures in my various coverage.

Earlier this year, his travels brought him to Columbus, Ohio for a double header between Northwestern and Ohio State. During one of the games, he sent me the picture below. I am sooooo envious.

Tammy Williams is one of my all-time favorite players. A star at Northwestern, she went on to play for my beloved National Pro Fastpitch Chicago Bandits. The shortstop was a huge fan of MLB Hall of Famer Ozzie Smith and even named her dog after him. Tammy was always a fun interview. It wwas always a pleasure watching her on the field or talking with her around the ballpark.

Unfortunately, the NPF folded, so I haven't seen Tammy in Rosemont in a few years. I did see her at a Northwestern game a couple seasons ago. Tammy still looks like she could put on the spikes.

This picture is bittersweet for me. I am happy to see these friendly faces, but sad I wasn't there in person. Next season, I need to mae a road trip to meet up with Don. 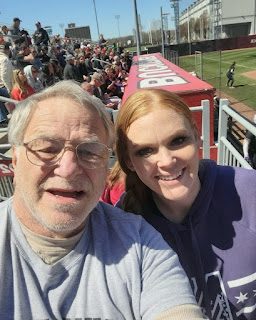