On the Beat With Mike Curkov

Mike Kurkov, news anchor for CBS 58 in Milwaukee made his professional wrestling debut at Great Lakes Championship Wrestling's Blizzard Brawl. I thought it would be a one-off, cameo appearance for Mike, but I was wrong on both accounts.

At Blizzard Brawl, Mike teamed with The Gunn Club to do battle against The Express and Kevin Thorn. Mike was no auxiliary player in this match. He was a legit competitor, who accounted very well for himself, but his story was not over.

On Saturday, December 3, Mike will again enter the ring opposite Thorn. This time, he won't have The Gunn Club on his side. Making matters more ominous, he will be facing Mordecai (a religious, zealot-like alter ego of Thorn).

Early this morning, I interviewed Mike about all of this. Much like Mike seeks interesting stories (as he explains in the interview), I sought out Mike because he is a fascinating story.

A veteran in the news media field, Mike talked about his career and what led him to the wrestling ring. His quest for an interesting story turned into his own interesting story, one which might win an Emmy for him.

Last year, when previewing the Blizzard Brawl card, I noted Mike's inclusion. I figured The Gunn Club would do the bulk of the battle, with Mike getting a hot tag and showing off a few moves, before tagging out again. I figured he might get the pin, but only after his teammates beat down the opposition. I was wrong and happily admitted it to him, the exact reaction he wanted to get, as he tells it in our interview.

Mike talked about his dedication and effort in training and it showed. He wasn't a sideshow for publicity. He took it very seriously and the results showed it.

His debut was in a six-man tag match and his subsequent matches have been various tag team efforts, too. At Blizzard Brawl, he will be going to the ring alone though, ready to face one of the more imposing wrestlers in Mordecai.

Mike discusses his mindset heading into the match, which is billed as a “Retirement” match. He is even more serious about this match.

I am torn when predicting the outcome. I can't see Mike's wrestling career ending, but I also don't think Thorn is ready to hang up his boots. Maybe this will just be the retirement of Mordecai.

Adding to the intrigue is Mike's possible Emmy win. He explains how it all tied together. I think the one more loose end is the Emmy win, which will be announced from Chicago sometime that night. That win would bring everything full circle and be a storybook moment for Mike.

No matter which outcome, it is one I don't want to miss. I will be “On the Beat” ringside for Mike's match and recapping all here the next day.

The entire card is:

There will also be plenty of other wrestling legends appearing, including Dustin Runnels, Billy Gunn, The Nasty Boys, Jimmy Hart, Gangrel and more. Of course, expect to see many other wrestlers and longtime wrestling fans in the crowd. This is THE big GLCW show of the year. It's one I never miss.

I really appreciate Mike taking time from his busy news schedule to discuss his career and Blizzard Brawl. On a side note, our paths crossed years ago, when Mike, Then with the Schaumburg Flyers minor league baseball team) granted me press credentials to cover the team.

Watch the interview at On the Beat With Mike Curkov. Go to GreatLakesChampionshipWrestling.com for more info and updates. 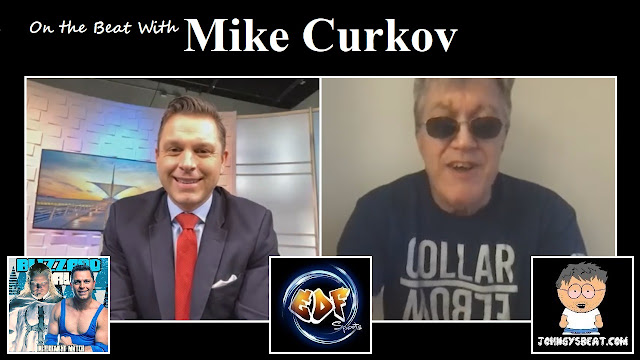