Celebrity Jersey Cards is a weekly series in which I create virtual trading cards for celebrities wearing jerseys. Today, I feature celebrities with cameos from star QBs.

Don Coryell became famous for his "Air Coryell" offense with the San Diego Chargers in the 70s-80s. Coryell retired after the 1986 season, ending a career that started in 1950. Although never an NFL player, Coryell is in the Chargers Hall of Fame. On his Celebrity Jersey Card, Coryell is joined by Hall of Fame QB Dan Fouts, who led his Chargers teams. 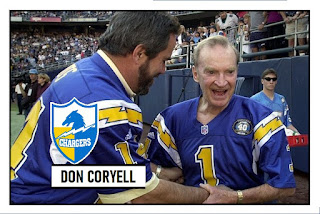 Virginia native actor Rob Lowe has had a lengthy career on tv and the big screen. Lowe has dealt with a few personal issues, but has rebounded and seems to be living well these days. I don't know of any connection to the Indianapolis Colts, but he still gets a Celebrity Jersey Card for donning the jersey. He wears #12, worn by Andrew Luck, the former QB who is also pictured. 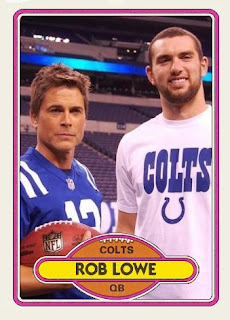