Jerry "The King" Lawler was born in Memphis, Tennessee and grew to fame there in the wrestling ring. Originally dubbed "the King of Memphis," Lawler eventually eapanded his kingdom to the AWA, WWE and elsewhere. He had a legendary feud with comedian Andy Kaufman and was inducted into the WWE Hall of Fame in 2007. A noted fan of Cleveland sports, he earned his Celebrity Jersey Card while wearing a #95 jersey, most notably worn by defensive end Myles Garrett. 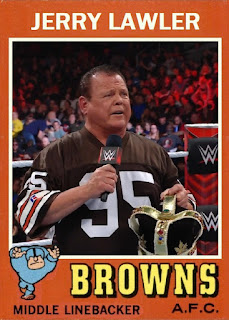 A Celebrity Jersey Card favorite, Velvet Sky returns. This time, one of "the Beautiful People" is wearing a #80 New Orleans Saints jersey, most notably worn by wide receiver Jimmy Graham. This picture comes from Velvet's NFVel photo shoot, where she repded every tea's jersey. If you haven't seen a CJC of Velvet in your team's jersey, keep checking here, because eventually you will. 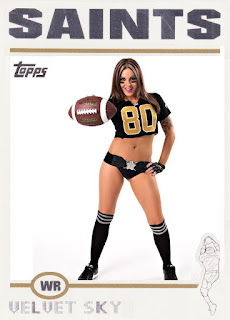