As the year comes to an end, I wanted to get a year end review of Ohio Valley Wrestling from our author friend John Cosper. Yesterday, I talked to John about OVW and also got a preview of his current wrestling and fiction book projects. That interview is at On the Beat With John Cosper.

In 2022, John became our go-to person for OVW news. A wrestling historian, as well as biographer, John attended many OVW shows, watching the action and talking to the talent. John has a keen eye and never steers me wrong.

Over the years, he told me to look for such upcoming stars as Billie Starkz, Charlie Kruel, Masha Slamovich, Skye Blue and many others. One by one, as I eventually saw them in person, I saw John's assessments to be right on. While Starkz is the wrestler most ready for the big time, the others aren't far behind on that same path. I quickly asked John to be my OVW correspondent for The Every Day Fan.

In this interview, John came through again. He names several wrestlers who had great years at OVW, along with a few most improved and ones to watch in 2023.

OVW might be the most exciting wrestling promotion in the country right now. Led by former WWE superstar Al Snow, it has quickly become home to fantastic wrestling action and rising stars. John much praise to Snow, along with trainers Doug Basham and the Amazing Maria.

Not surprisingly, when I talked to Snow earlier this month at Great Lakes Championship Wrestling's Blizzard Brawl, he was ever-humble, giving credit to his trainers and the wrestlers. Despite his humility, we all know Snow has a great mind for wrestling and he is proving it with the success of OVW.

John finished by giving a preview of his current book projects, starting with another OVW connection. John interviewed and featured OVW announcer Dean Hill in “Bluegrass Brawlers,” his book from a few years back. A part of OVW from the beginning, also a retired policeman, a musician, a motorcycle enthusiast and more, Hill is a part of Louisville history and not just around the ring. John previously talked about this book and it's another I look forward to reading.

He also has a book in progress with Gregory Iron. John offered to delay the book due to the unfortunate passing of Iron's father, but Iron is eager to get back into it.

John also discussed a book project featuring June Byers. A three-time women's world champ in the 40s-60s, Byers has quite a story. Two huge stories involve matches with Mildred Burke and The Fabulous Moolah, but there is a lot more to her story and John plans on telling it. John even admits to originally having a bit of a chip on his shoulder about Byers because of the Burke incident, but states he sees things in a bit of a different light now.

In addition to wrestling books, John is compiling quite a fiction library. He revealed the premise of the third book and a hint about the fourth in the Dead Park book series.

I appreciate John's contributions over the last year and I look forward to continuing this connection next year. John's knowledge of wrestling history, his insight into OVW and his continuing stream of excellent wrestling books makes him a great contributor to our wrestling coverage.

For more info on John and his books, go to EatSleepWrestle.com and DeadParkBooks.com. Check TheEveryDayFan.com for more sports coverage. 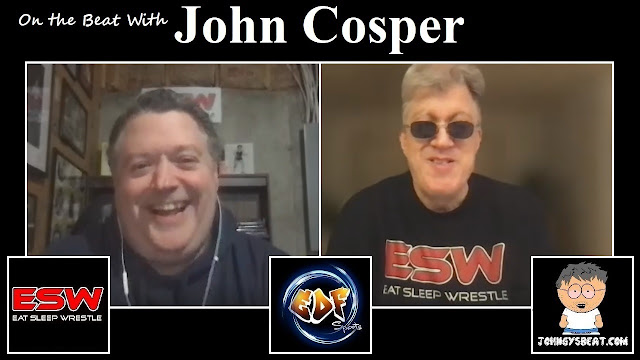